Today I noticed that somewhere along the way I picked up a follower. I have no idea when this happened. I wasn't paying attention because I kind of didn't think anyone would actually want to read this! I probably should have put a little more thought into the URL if it's going to turn into a real blog. But thank you if you're visiting, and especially thanks to ArchDragon of The Arch for following!

Anyway, on to Creatures 2! 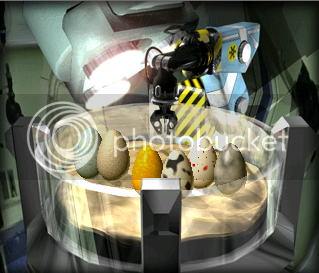 You can see just from looking at the Hatchery that C2 has a very different aesthetic than C1. Personally I prefer the warmer-toned steampunky look of the first game to the more sterile machinery that dominates in the second, but both games are lovely, especially for their time.

All six of these eggs contain Norns based on JayD's 10-Hour Nova Subterra genome and were created with Egg Maker. Unlike my first generation Norns in C1, I'm not editing their genetics aside from their appearance genes. There are a male and a female of each of the three base C2 breeds (Types H, I, and J). Their pigment and pigment bleed genes have been semi-randomized, so their colors will be a surprise!

After some deliberation, I decided to start with a female. I choose the plainest egg, the second from the left, to hatch first. After a few moments in the incubator, out popped a Creature far less plain than her egg, a little magenta Hebe with lime green eyes! I fell in love with her coloration the moment I saw her. I'm especially fond of her striking eye color. Unlike C1 Norns, C2 Norn eyes can vary drastically in color due to the effect of their new pigment bleed genes (although there is no specific gene for eye color). 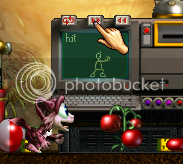 Starting a very different naming trend than in my C1 game, I named the new Norn Darwin. I thought it was an appropriate choice! I led Darwin to the verb computer, and she proved to be a very quick learner, grasping all the verbs with only a couple repetitions. She was also a bit distractible, but who could blame her with a whole new world to explore? Her attention was stolen away several times by the various fruits and foods lying around the incubator area, a good sign for her future! As in C1, it's important to get your Creatures eating early in their life so they develop good habits.

Another major source of frustration in both games is convincing Norns they also need sleep, and I think that getting Norns to sleep is especially hard in C2. This was the reason I chose the Novas over the more popular Canny Norns. Both breeds are good and much, much smarter than the default Norns, but I find that Novas tend to be somewhat better sleepers (but worse breeders) than the Cannies. After some tossing and turning, Darwin managed to settle down for a nap. Hopefully she will keep this up well into adulthood!
Posted by Keeley at 11:17 PM

Welcome to Creatures Great and Small, the chronicle of my recent adventures with the Creatures series! I first became a fan as a child, and now, a decade and degree in evolutionary biology later, I'm rediscovering my love for the game.

Creatures is a series of artificial life simulation games originally developed by Cyberlife/Creature Labs in the 90s. The stars of the games are small, furry animals called Norns. But Norns -- and other Creatures -- are much more than just virtual pets! Behaviors in the games are not pre-scripted, and the Creatures learn by interacting with their world and have semi-realistic genomes that are subject to mutation.